What I Learned Switching Careers from Taxonomy to Content Design

Your approach is more important than your resume.

Entering into a new field can be a huge challenge, even if you’re going for so-called entry-level positions. It feels as if all jobs require applicants to have a few years of experience, which makes me wonder how this ironic spiral became a thing. But we have to deal with the system as it is, so I’m sharing how I pivoted careers, which seemed overwhelming at first.

But there’s no such thing as the right career in my opinion, and each one of us needs to play with the cards we have. That’s kind of a relief, isn’t it?

Don’t worry. This article won’t just share how to get into a new field in three easy steps. I also won’t humbly talk about the secret to making a successful transition by suggesting some smart-sounding responses to use in an interview. Instead, by sharing how I felt during the challenges of a career switch, I’m hoping my successes and failures can help you learn something about your own process.

I struggled to find a meaningful career for myself at first

In college, I was one of those students who swayed from one avenue to the next on a weekly basis. But on the surface, I pretended I was consistent. My super conceptual goal was to connect people and information, and I told everyone about it at every chance. Soon after entering the workforce, I realized it’s challenging to come to terms with the gap between expectation and reality.

I thought my goal was clear enough to set me up for success in my professional life, and I worked for two traditional Japanese companies in my early 20s. But after landing my first few jobs in fields like marketing and HR, I felt disappointed with my performance. Above all, I didn’t really like those jobs, but saying no didn’t seem like an option for me then since I was new to the workforce. If you’re not familiar with the norm, it’s common for Japanese companies to assign new grads to whatever roles or departments need workers—regardless of the grads’ preferences.

While I slowly bounced back from setbacks and approached 30 (which seemed like a huge milestone for me then), I stepped back a little to my original goal: connecting people and information. Continuing to work in those roles I disliked didn’t seem like a closer step towards that goal. So I decided to go to grad school, where I studied information science. The coursework was intense but fulfilling.

After two years in grad school, I finally had the words I needed to explain my interest and focus. It wasn’t until I was mapping out three circles to visualize usability in my small dorm that I realized the centerpiece of my interest was information architecture. This meeting between my interests and my happiness led me to a taxonomist position after I finished grad school. 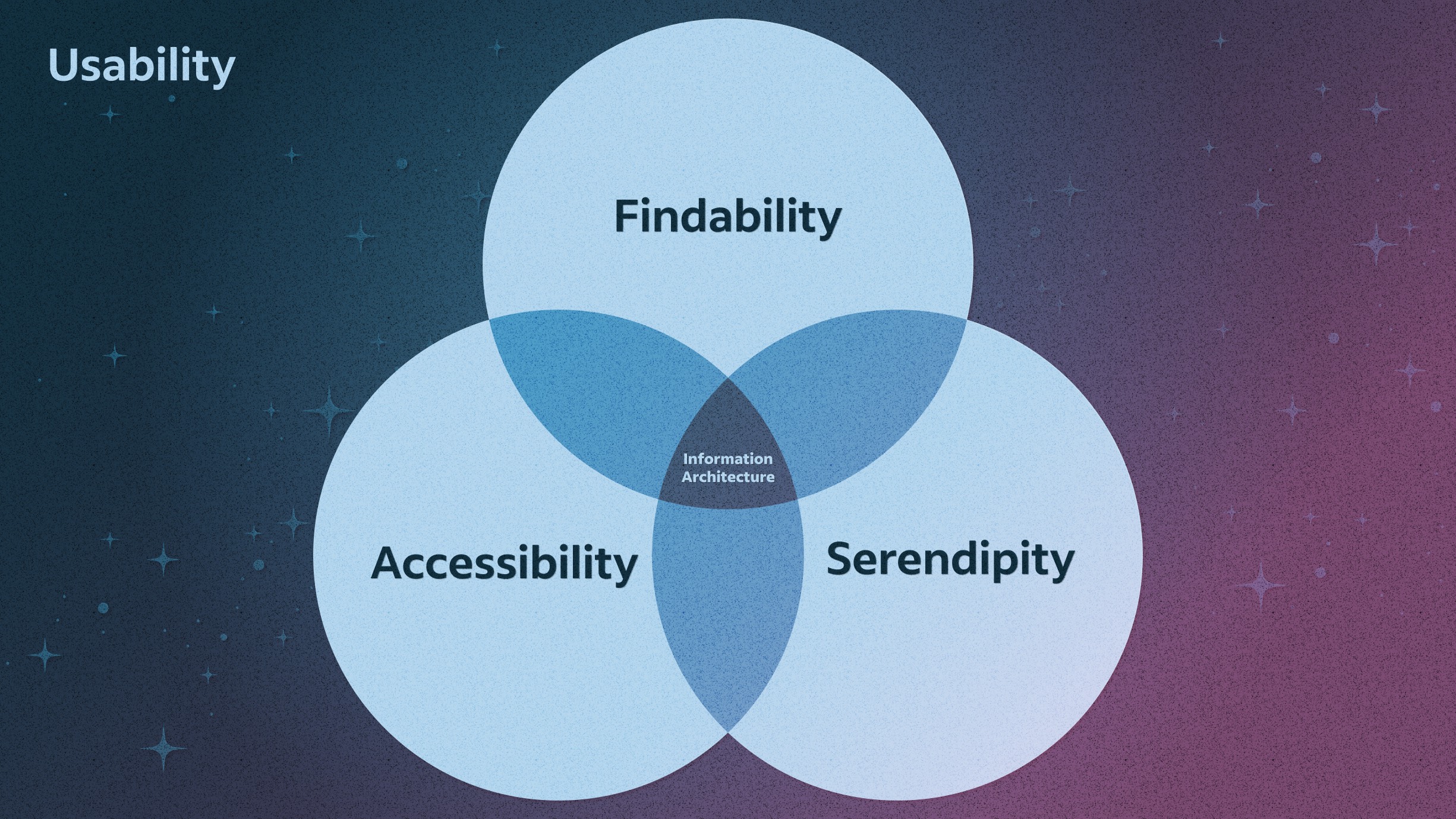 What I wish I knew when switching roles

Since taxonomist was a relatively minor job title in Japan at the time, I frequently thought about what my future career would be. Experiences in taxonomy trained me as a professional in backend structured data. On the other hand, I started to think about roles leaning towards the front end.

Around the same time, I noticed an industry trend of job titles changing from Information Architect to Content Strategist or Designer. Grad school taught me to ask questions without hesitating, so I began piecing together information by talking with a content designer at Indeed while I worked as a taxonomist. Ultimately, finding new work in content design was rewarding. But there are a few things I wish I knew before I started my career pivot.

When we think about career transitions, it’s tempting to put ourselves into the box of existing job titles or linear tracks. As a taxonomist, however, that didn’t apply to me. Having an uncommon job title helped me think about available paths beyond my current job title because I focused on elements of what I did in my previous role instead of the title.

When we consider going into a new field, qualifications we don’t meet often stand out in our minds. Sometimes, they can look like an unconquerable hurdle. In retrospect, I see how skills needed for content design overlapped with my training, and skills often carry more weight than a title. But I dwelled on my lack of an English, marketing, or journalism background when I should have been highlighting the strengths I had in metadata and information architecture. When you’re reaching for a new role, remember that an interviewer may be more interested in your skillset than your current title.

Build a professional support network to get feedback often

One of the biggest challenges of switching was preparing my portfolio. Reaching out to people for feedback and inspirational conversations was an essential part of this. For instance, a simple practice like regular conversations with my mentor kept my spirits high and convinced me that my potential new role was a feasible option for me.

Feedback can also take many forms, and it can be painful sometimes. My first application for a content designer role didn’t lead to success. But the failure taught me how to make my case the next time. I paid attention, improved, and kept trying. Persisting through rejection felt hard at the time, but it was a necessary step.

Keep in mind that feedback is also full of positive surprises. When I first shared my desire to switch careers, people around me became supportive. The first content designer I talked to connected me to people who were indispensable for polishing my portfolio. My work became a true UX design presentation only when I started asking for feedback from people who could constructively criticize my work with the best balance of candor and kindness.

Imposter syndrome is real, and we all need to find ways to deal with it. It was hard to convince myself on my own that I was capable of doing something new, so regular conversations with someone who would calm and encourage me was reassuring. I don’t think imposter syndrome itself is all bad. Often, it’s the sign of growth, but we need to distance ourselves from it properly. Being too humble can be just as destructive as being too proud. Don’t judge yourself; other people will do plenty of that for you.

Keep working toward the role you want

In March of 2022, I received an offer. Now, I’m writing this article and juggling everything involved in my new content design role. Yes, I do feel stressed out sometimes. But I saw the worth in my skills, networked to find people who could help me ladder up, and did my best to remember my own value. My career has never been linear, and I’m starting to feel that’s ok. Switching careers was hard work, but it was worth it.